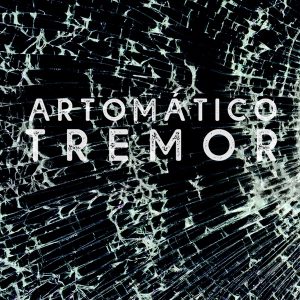 Artomático releases his third solo album in 2022, an independent release entitled ‘Tremor’. Inspired by the concept of “universal vibration as a source of creation and destruction”, the album proposes thirteen new compositions conceived as a “sound, auditive, sensorial experience”. According to the artist, “the listener must complete each piece fifty percent and give it the meaning they want to give it.” If in ‘Electroflamenco’ he showed his pioneering vision of electronic flamenco and in ‘Kinética’ he revised his works for dance and audiovisuals, in ‘Tremor’ he explores the essentiality of sounds, frequencies and rhythms, making them coexist with motifs such as folklore, classical music, flamenco music, science, painting or philosophy. Although the songs work autonomously, the album as a whole reflects the context of its gestation, marked by the pandemic years and the volcanic eruption on La Palma. The album is available on Spotify, Apple Music, Amazon Music and all digital platforms.

· After ‘Electroflamenco’ and ‘Kinética’, works linked to dance and audiovisuals, the sound creator proposes thirteen new compositions as a “sensory experience”

· Folklore, classical music, cante jondo, science, painting and philosophy coexist in an album “that the listener must complete fifty percent”

· The artist reflects on “universal vibration as a source of creation and destruction”, in times of pandemic and volcanoes

Artomático, alias of sound artist and composer Daniel Muñoz Pantiga, releases his third solo album, an independent self-release entitled ‘Tremor’. Inspired by the concept of “universal vibration as a source of creation and destruction”, the album proposes thirteen new compositions conceived as a “sound, auditory, sensory experience”. According to the artist, “the listener must complete each piece fifty percent and give it the meaning they want to give it.” If in ‘Electroflamenco’ he showed his pioneering vision of flamenco and electronica and in ‘Kinética’ he revised his works for dance and audiovisuals, in ‘Tremor’ he explores the essentiality of sound as vibration, frequencies and rhythms, making them coexist with motifs such as folklore, classical music, flamenco music, science, painting or philosophy. Although the songs work autonomously, the album as a whole reflects the context of its gestation, marked by the pandemic year and the volcanic eruption on La Palma. The album is now available on Spotify, Apple Music, Amazon Music and all digital platforms.

‘Tremor’, the third album by Daniel Muñoz ‘Artomático’ (Madrid 1970), is based on the idea that “every life, every structure, has a vibration, a frequency that moves it, from a the molecules and atoms to the cosmos”. Hence, the electronic musician proposes thirteen «micropieces and macropieces: some are about minimalism, about amplification of details; others offer a distant perspective, in all cases it is a sensorial experience». Both visions come together in the same objective, according to the artist, “to seek expression through sound sensations”. As a whole, the work -his third self-published- emphasizes deep listening: «I want it to be a sound, auditive, physical experience. There is a personal vision of slow listening, everything happens little by little». In this way, “the listener must complete each piece fifty percent and give it the meaning they want to give it.”

On the musical level, he provides meticulous work with sounds, frequencies and rhythms that he creates from scratch with oscillators, samples, synthesizers, sequencers and audio processors in his studio, located in Aljarafe in Seville. To this he adds musical references already present in his previous works. In ‘Tremor’ there is also flamenco electronica, a concept of his own that he has not only shown on his album and live show ‘Electroflamenco’, but also in the collaboration, as producer and musician, on singer’s David Lagos’ ‘Hodierno’, as well as in his compositions for works by bailaores and dancers such as the live show ‘Danza 220V’ created with Antonio Ruz, Rafael Estévez and Valeriano Paños, ‘¡Fandango!’ by David Coria or ‘Hilo roto’ by La Venidera. On the new album, already available on Spotify, Apple Music, Amazon Music and all digital platforms, this is reflected in ‘El grito en el cielo’, a composition by seguiriyas rhythm built from old cante and guitar voices. But there is also a search into Spanish folklore, as reflected in the piece entitled ‘Kinética’, a nod to his previous work that develops a composition originally created for the live performance ‘Humano’ by David Coria at the Théâtre Chaillot in Paris . «Instead of the typical 4×4 of techno , its 3×4 rhythms comos from the danceable fandango that in this case I understand as a tool for trance», explains the musician.

There are also mentions of other electronic genres such as the ‘glitch’ in the piece ‘Volatines’; to sound art and concrete music, with John Cage as a reference in the piece ‘Interiors’, which incorporates noises from machines, valves or transistors; and contemporary music in connection with world music such as the Balinese, aligned with Steve Reich’s theory of continuous slow evolution, which motivates the piece ‘Gamelianas’. Also, he doesn’t forget his musical beginnings with the drums, which he plays and processes in ‘Decode’. And he once again has classical music a presence in his work, this time, starting from Bach to express philosophical concept of Emilio Lledó: one in the piece ‘Paideia’, referring to education; and another in ‘Bienser’, which Artomático uses to close the work as an “optimistic, beautiful, naive and fragile paradise”.

Images are once again relevant in the work of the artist, who is also a photographer and audiovisual creator, and has put music to short films such as ‘Enemigos’ by David Muñoz and documentaries such as ‘Puerto’ by Remedios Malvárez (Singular Productions). This time he puts the focus on painting: “In ‘Enero’ I imagine what Rothko or Tàpies would do if their material to create was sound,” he says. Although there is no lack of cinematographic references. The piece ‘Caminante’ “is a whim, a kind of dreamy sound memory of David Lynch’s films.”

The sensorial aspect shines through in songs like ’44 degrees’, which translates into sounds “the physical sensation of extreme heat”. ‘Pausa’ is a sort of intermission in which, through sound design and a thoughtful structure, it opts “not for full silence in the face of what disturbs or agitates us, but as an option to break the noise”. As a counterpoint is ‘Limits’, a piece with which Artomático tests “the sound, musical and personal limits”. Not in vain, the sensations contained in ‘Tremor’ have a strong correlation with the context in which the album was created.

A pandemic and a volcano

On the one hand, the pandemic, which is why it reflects “the state of confusion of these last two years and that many of the subjects of the compositions are like portraits of the states of mind, individually and socially, of saturation, confusion, noise and excess of information that we have experienced.” And, on the other hand, there is the eruption of La Palma in the Canary Islands: “I have always been fascinated by the volcanic phenomenon, the destruction and creation, the infinite power of the vibration of the planet, which has created islands where I have been. I saw these tv images of how the new volcano of Cumbre Vieja destroyed in a few seconds a house where we spent a couple of weeks a few years ago, and now it has disappeared. It makes you feel so small, less important than a single atom. Following the information shared by the INVOLCÁN scientists, I noticed the importance of the sound from inside the earth, since it explained what was happening and gave warnings about the near future, this tremor was always the best source of information for them». According to the creator, “all that made the music I was creating a more profound sense, and all that universal vibration was melted in ‘Tremor'”.

‘Tremor’ reviewed in France by Boulimequedemusique 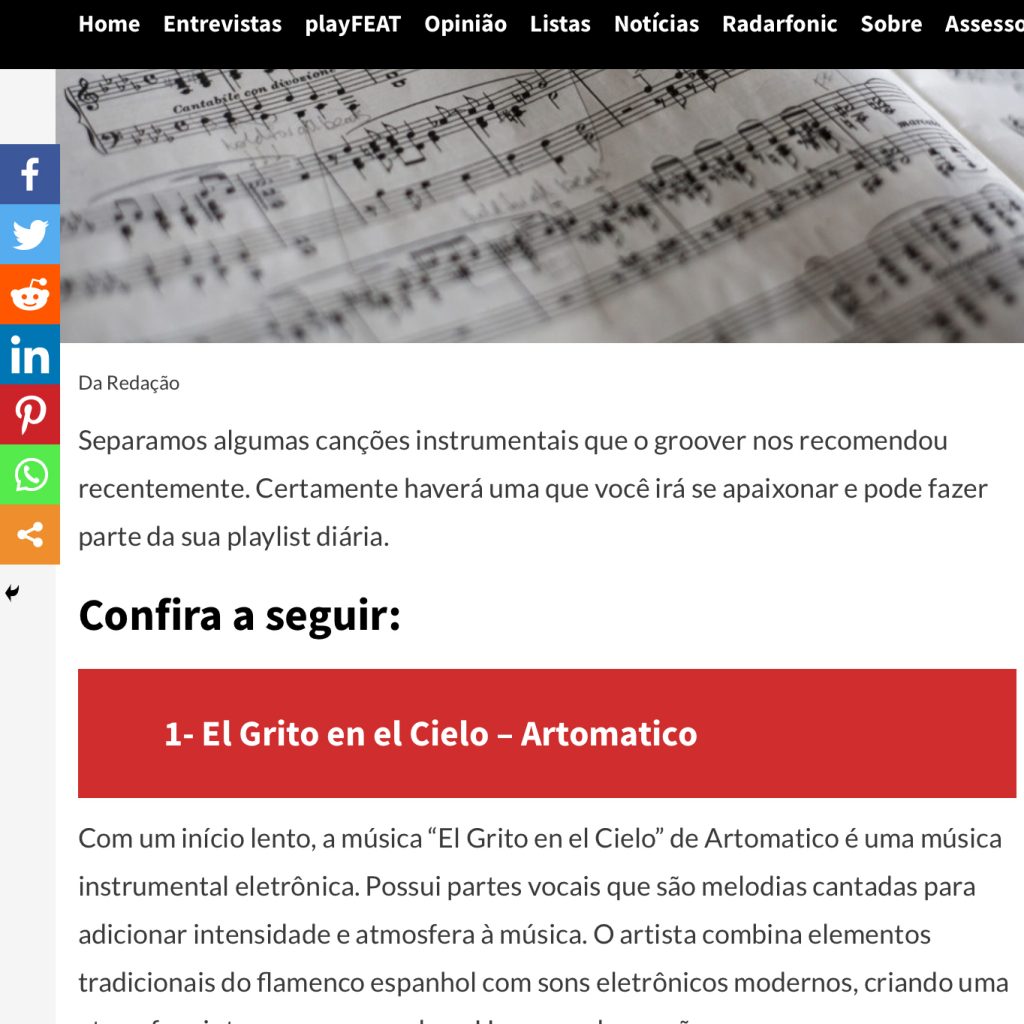 ‘Tremor’ reviewed in Brasil by Playfonic

With a slow start, the music of Artomático’s ‘El Grito en el Cielo’ is an electronic instrumental with vocal melodies that add intensity and atmosphere. The artist combines traditional elements of Spanish flamenco with current ones, generating an intense and provocative atmosphere. A great song 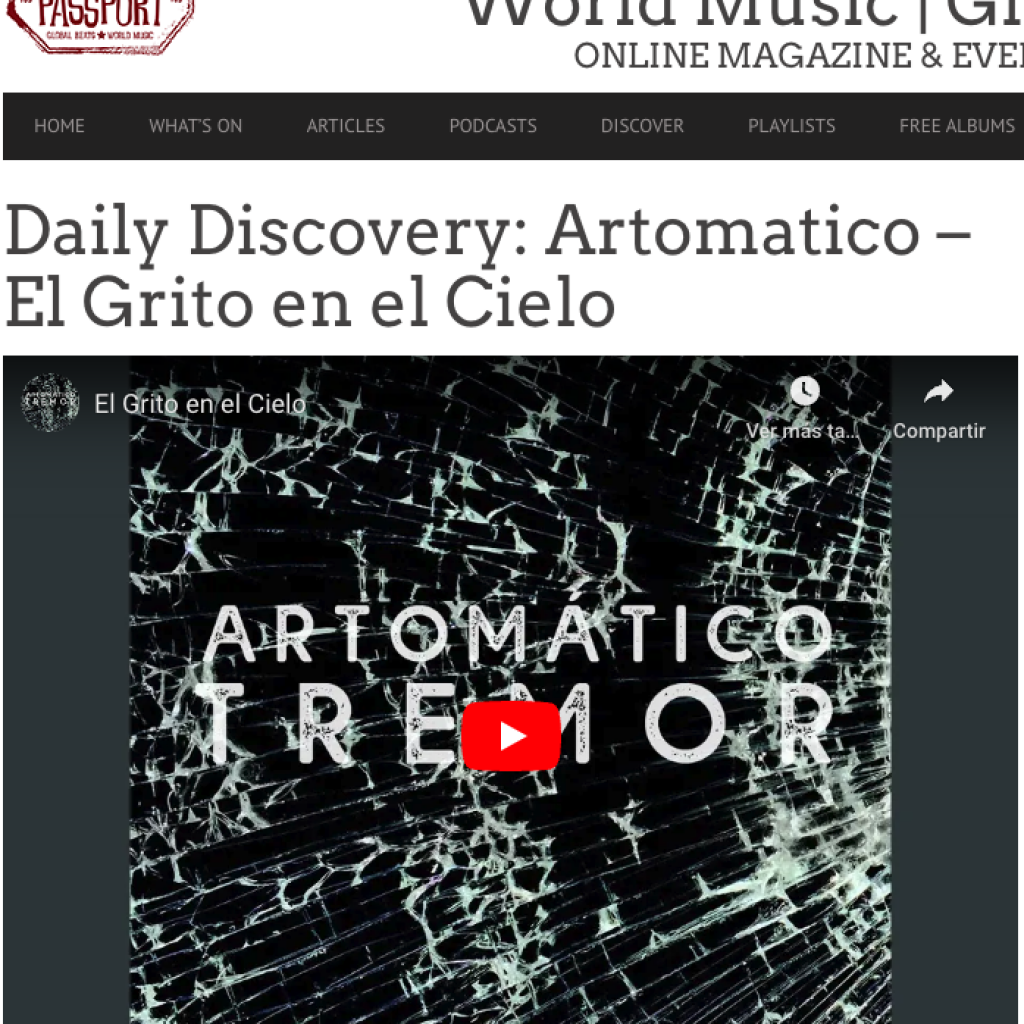