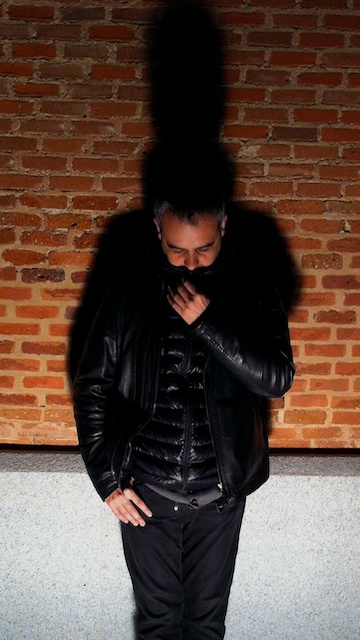 Artomático, is the artistic project of the musician, producer and sound engineer Daniel Muñoz (Madrid, 1970), graduated in Audiovisual Communication from the Complutense University of Madrid and Master in Sound and Acoustics at the Polytechnic University of Madrid.

After passing through various rock formations, he founded the Spanish-British Monotone drums and producer group, which released the album ‘Gravity’. He has also participated as a drummer in the discography of the English singer Emma McGlynn, recorded and edited in the Metropolis Studios in London. Previously, he worked the sound of live figures in Spanish music, and composed and recorded music for short films (‘Filly’ David Muñoz and Antonio Trashorras, ‘the last day’ David Muñoz, ‘Rigor Mortis’ Alejandro Marcos) and television promitionals (‘Who is the murderer?’ promotional spot channel Calle 13). In parallel, he has developed pioneering online projects that made him winner of the Andalusia Prize for Journalism 2010.

After several years of laboratory and research work in the sound studio, it starts a live and studio project name Artomático, which fuses improvisational live electronics, sound design and live sound transformation, with genres such as flamenco. ‘Artomático + Flamenco’ premiered live at the closing ceremony of the 2008 Ciutat Vella Flamenco Festival in Barcelona and has been presented in programs such as Noche en Blanco 2008 in Madrid, Redes Flamencas 2008 in Barcelona, ​​L’Avantguarda del Flamenc 2009 in the Cultural Center Contemporary L’Escorxador in Elche or the Festival Vaivenes 2009 in Alcalá de Guadaíra, as well as the Holywell Music Room in Oxford in 2010.

In 2010, he premiered at the Madrid en Danza Festival (Corral de Comedias de Alcalá de Henares), the work ‘DANZA 220V’, created together with Estévez & Paños and the dancer and choreographer Antonio Ruz, with the singer Sandra Carrasco as collaborator. The work, was also presented at the 2012 Quartier d’Été Festival in Paris, at the Athénée Théâtre Louis-Jouvet, and continued to tour Europe, stopping in cities such as Reims and Rouen in the 2013 season. In this stage work he takes charge of the sound design of the piece plus live electronics on stage.

In 2011 he composed, recorded and mixed, two original pieces, praised by critics, for the show ‘Ángel: del blanco al negro’ by dancer Ángel Muñoz, premiered in Jerez and presented in Madrid and London. Shortly after, the show ‘Preflamencos’, a project by the dance company Estévez & Paños, whose musical work is performed live, with a script of dance and music, but with paths open to deepen into live electronics improvisation and live sound creation. Also in the same year he created the music and sound design and sound installation for the contemporary dance project ‘Ojo’ by Antonio Ruz, RNE Critical Eye Award premiered at the 2012 Spring Autumn Festival in Madrid and at Sophiensaele in Berlin. The work was also presented on the European scenic circuit in forums such as Athens Summer Festival or Danza a Escena on stages such as La Laboral de Gijón, among others. Artomático has also applied its musical concept to the theatre, creating, together with the actresses Esperanza Pedreño and Amalia Hornero, the play ‘The Skeleton Woman’, premiered in June 2012 at the Kubik Fabrik room. Commissioned by dancer and choreographer Melania Olcina, he composes the soundtrack for the experimental dance video art ‘Mujer sobre fondo’ and “Galmatopeia”.

His first solo record release was published in 2016 with the title ‘Electroflamenco’. From the album, he develops a live show for live electronics, sax and dance, with Paula Comitre and Juan Jiménez as guest artists that he has staged at festivals such as the Bienal de Flamenco de Sevilla 2020 or the Düsseldorf Flamenco Festival 2021, and which continues on tour.

In parallel, he continues his collaborations with dancers, bailaores, singers and musicians. In 2017 he carries out the artistic direction, sound design plus the live musical creation of the show ‘Claroscuro’ by bailaor Ángel Muñoz. In 2018 and 2019 he worked on the production, concept, programming, recording and mixing of the album ‘Hodierno’ by singer David Lagos, with the participation of Juan Jiménez on saxophone and Alfredo Lagos on guitar, which premiered live at the Bienal de Sevilla and It has been presented in other spaces such as the Teatros del Canal de Madrid on the occasion of the Suma Flamenca Festival. The work was the theme and soundtrack for the show ‘¡Fandango!’ by David Coria and David Lagos, a co-production of the Théâtre Chaillot in Paris -where it was released in 2020- and the Seville Biennale. The work, awarded at various festivals, has been touring Europe for two years.

In 2019 he created, recorded and mixed the music for the dance piece ‘Hilo Roto’ by the La Venidera company of the dancers and choreographers Albert Hernández and Irene Tena, soloists of the Spanish National Ballet; and is in charge of the musical creation and live performance of ‘Transmutation’, a new creation by the choreographer and National Dance Award, Antonio Ruz, premiered at the Museum of the University of Navarra.

His second solo album, ‘Kinética’, was released in 2020 in full confinement, an album that takes up and recreates his work for dance companies and audiovisual projects. Also that year he collaborated with the bailaora Paula Comitre, for the work ‘Cámara Abierta’ with the composition and recordings of several electroacoustic pieces. Among the latest collaborations, stand out the artistic consulting in ‘Imperfect’ by David Coria and Jann Gallois, premiered at Chaillot theater in Paris, as well as the composition, recording and mix of the music of the live performance ‘Humano’ by Coria in the same Parisian theater; the composition, recording and mixing for the piece ‘El arte de rebobinar’ for the dancer Adrián Vega; and the original music, sound design and sound mix for the documentary ‘Puerto’ by Remedios Malvárez.